I am writing this third week's blog entry 2500 miles cross country in NYC in a friend's apartment in Bed Stuy looking out the window overlooking some beautiful Brooklyn brownstones. Last week, I took my mother -- a feeble, yet surprisingly agile, Philippine immigrant woman whose english is limited -- to The Statue of Liberty. My mother never imagined coming to America as a child, let alone see the Statue of Liberty, a symbolic monument that welcomed immigrants as they arrived to the US amidst a striking NY cityscape. She, Lady Liberty, was spectacular. My mother and I could not believe our eyes as we took the ferry down to Liberty Island and stood beneath her in awe. We found ourselves amazed by the scale and detail of the colossal giant.

I had to explain to my mother the symbolic meaning behind the monumental gift from France, and she was surprised the statue purpose served as a beacon of light for newcomers entering the country. Together, my mom and I read the sonnet engraved at the bottom of the pedestal by Emma Lazarus.

The New Colossus
Not like the brazen giant of Greek fame,
With conquering limbs astride from land to land;
Here at our sea-washed, sunset gates shall stand
A mighty woman with a torch, whose flame
Is the imprisoned lightning, and her name
Mother of Exiles. From her beacon-hand
Glows world-wide welcome; her mild eyes command
The air-bridged harbor that twin cities frame.
"Keep ancient lands, your storied pomp!" cries she
With silent lips. "Give me your tired, your poor,
Your huddled masses yearning to breathe free,
The wretched refuse of your teeming shore.
Send these, the homeless, tempest-tost to me,
I lift my lamp beside the golden door!" 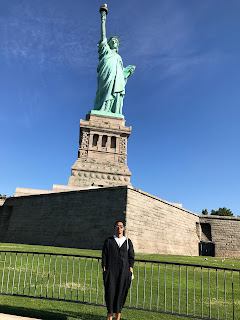 As my mother and I stood there, we couldn't help but be baffled by the current administration and their policies fueled by fear and xenophobia.  With Muslim bans and border walls, is this symbolic statue still a representation of America's open arms for refugees? Is she still the "mother of exiles?"

This is not the first time, however, that the US has turned away refugees or immigrants.  We refused Jews entry into our country even with credible visas.  We had a Japanese registry and internment camp.  The following article paints a cyclical portrait of How America’s rejection of Jews fleeing Nazi Germany haunts our refugee policy today.

A few weeks back, I wrote about how I had difficulty connecting physical, emotional, and mental trauma to the beach.  Being here in NYC is giving me perspective and further information on how symbols and borders can serve as sites of trauma and healing.
Posted by Jay Carlon at 10:56 PM