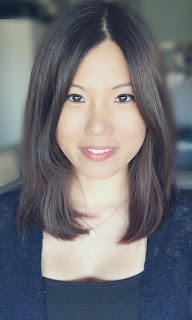 Teresa Lo is sure to bring a crisp, clear-cut perspective to the panel. She is recognized as a feminist voice for the millennials. Her first book was consciously self-published, and Teresa will share her views on self-publishing, why it is relevant and critical for underrepresented voices to gain exposure. How is this related to identity? How does Teresa view identity in her work and when she first developed her writing resume? Come and find out next Tuesday, 11/14, 6 pm reception; 6:30 pm program commences in the Marion Davies Guest House parlor.

Teresa Lo is an American bestselling author and award-winning screenwriter. Her debut novel, Hell's Game, was one of the top 20 young adult horror novels on Amazon in 2013; and her series, The Red Lantern Scandals, was a bestselling Asian-American literary work. She has been interviewed by leading Asian-American publications such as Hyphen Magazine and Angry Asian Man, and in 2013, she was the judge for Hyphen Magazine's first ever erotica writing contest. Readers have commented that her books "read like screenplays" because they evoke strong emotions and visuals, and she has quickly established herself as a feminist voice for the millennial generation. In addition to writing books, she has been published in the Comma, Splice Literary Journal; Yahoo, Examiner, Buzzfeed, Popsugar, Lawcrossing, Hustler Magazine, and more.

Lo was born and raised in Coffeyville, Kansas, and her parents owned a Chinese restaurant which she began working at when she was twelve-years-old. After high school, she attended the University of Kansas, where she graduated from the honors program and earned a B.A. in History with a certificate in global awareness. She was named a KU Woman of Distinction for her achievements in the arts, and she was founder of the T.Lo Club and president of Phi Alpha Delta, the pre-law fraternity. During her senior year of college, she was a research intern at The Late Show with David Letterman.

After college, Lo moved to Los Angeles to attend the USC School of Cinematic Arts where she majored in screenwriting. She graduated with a Masters in Fine Arts, and she was a participant of the NAMIC Fall Writers Workshop. In 2010, she won the Grand Prize in the Script Pipeline Screenplay Contest, and she also placed two other scripts in the finals, a rare accomplishment. That same year, her drama script The Physicist also was a finalist for the prestigious 2010 Bluecat Screenplay Contest. Lo has one produced credit, "Angel's Bread," which won the Silver Lei Award for Excellence in Filmmaking at the Honolulu Film Festival 2010; and she was a former cast member on PBS' movie and television review show, Just Seen It.

Lo’s fiction has been optioned by production companies such as Winkler Films (Creed, Rocky), and she is currently working on a TV adaptation of The Red Lantern Scandals with Danny Zuker, executive producer of Modern Family.

Reception at 6:00 pm / Program commences at 6:30 pm in the Marion Davies Guest House parlor /
RSVP via Eventbrite for this free public program
Posted by Unknown at 7:00 AM