Thank you, Zoe
for nourishing us with your Serenata 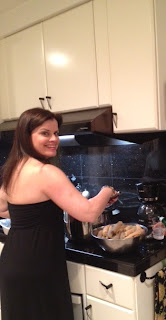 Saturday night was some enchanted evening.

As previously mentioned, after my first story circle at the Marion Davies Guest House, my group hungered for more.  Since food is banned at the Guest House, Eli and Shayna graciously offered to open up their beautiful home, and turn their kitchen over to Zoe.  Thank you, Eli and Shayna.

I know for a fact that more people wanted to come, but it's impossible to pick a date where everyone can make it.  In fact, I wasn't even sure I could because of some glitch of not receiving the first invite, and the date being my husband's BD.  Would my husband want to celebrate his BD with "strangers?"  It'll be like a party.  You'll have a great time.  And based on what I relayed to him about our first story circle, he was totally open and receptive -- as long as I promised not to spend his entire BD in the kitchen cooking which is actually tougher than it sounds, given the instructions to bring a story and a dish.

As some of you know, I've been trying to eat sensuously.  Food that is good for you, good to you, enlivens your senses, enhances life and sense of overall well-being.   Of course with so many bakeries, I thought about dessert.  But so many people I know are trying to cut down on sugar, and growing up mostly on savory, I don't really have too many stories about dessert.

Turns out several people ate chicken feet while growing up, and love it!  Some of them had parents who burned off the plumage.  Scraped the scales off the feet, clipped the toenails.  We couldn't find chicken feet growing up in Akron, Ohio, so I was spared this delicacy.  Toby said she read the reason chicken soup was so effective at knocking out the common cold -- chicken feet flavoring the broth.  Oh, the stories dishes can tell, and the places dishes can transport us.

About sixteen of us were able to attend.  The stories that poured were marvelous, moving.  Zoe kicked the festivities off with how Serenata always comforts her.  How bacalao (salted cod) used to be peasant food, how the dish comforts her, reminds her of home, heals her, and now it is expensive, not unlike skirt steak.  Zoe shared how cooking can be very therapeutic, and get you through challenging times.  I couldn't agree more.  Marion Davies would also agree, which is why I love her hamburger quote so much, and learning that she was an ice cream addict, able to out-scoop and out-eat Howard Hughes.

Big hug and thanks also to Anette for allowing me to take her photograph. 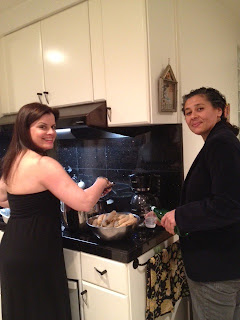 Jeff told us how he could smell what was for dinner at his house five blocks away, and so could everyone else.  The aromas of curry, and dried fish travel far and wide.

As the name "Serenata" suggests, there was also music (serenading) involved.  Eli & Phil are gifted musicians, and played Hallelujah, one of my favorite Leonard Cohen songs, in my honor. 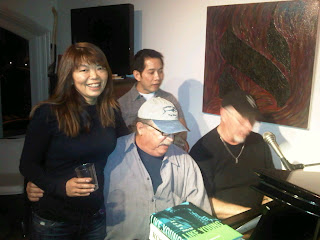 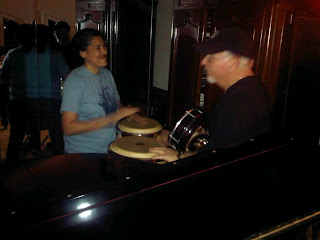 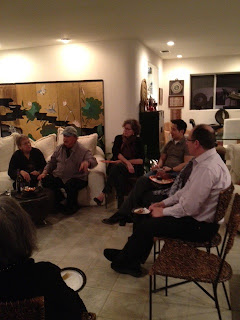 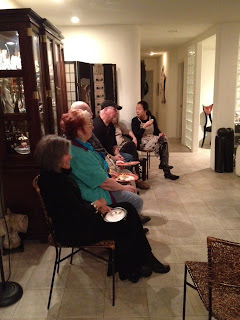 Behold the power of a story circle.  We form tight intimate bonds, sharing the topics that bond us to each other, and make us whole.  Much like food.  Club/music scene on Sunset Strip.  Watts Riots.  Race and Racism.  Travel (mis)adventures.  Mishegoss.  You had to be there.

And you can, next February 18th.  Come experience the magic, the joy.  Anything can happen, and probably will.
Posted by SensuousGourmet at 8:23 AM