On Saturday September 8th we had our first rehearsal for our community performers.  There will be 7 brave and spirited members of the community who are not professional performers, but will be performing in my new piece at the Annenberg Beach House on Sept. 28, 29 and 30!

Rehearsal started at 10am with the "name game".  This is a great ice-breaker and a way for all of us to remember each others' names and get a little movement work-out at the same time!  Basically, we stand in a circle and one by one, we put a gesture to our name.  Everyone learns the name and the gesture, and then we move on to the next person, accumulating  until we have a whole phrase that consists of everyone's name and gesture!  It's really quite fun, and the participants all seemed to get into it!

After that, we did some exercises that help with focus and awareness while moving.  Basically, a lot of the choreography that the community will be doing will be about moving as a group or moving in canon.  So, rather than "dancing to the music", the group will be dancing to each other.  They watch and listen each other to know what comes next!

Eventually, we made it outside where we put our ideas in the actual space.  I gave everyone a beautiful salmon/coral colored parasol, we walked down to the beach, near the water, which is where our performance begins.  Then slowly, with the voiceover of a Rumi poem in the background, followed by me singing the 1930's love song, "At Last" by Etta James, the group moved as a unit, with parasols moving in unison, from the ocean up to the boardwalk.  The group did fabulously, and we got a lot of people wondering what was going on.  "Is it a wedding?"  Of course, I'm sure it looked like a rehearsal for a wedding.  And considering that the theme of my piece is "duality" and the relationship between the Personality and the Soul, between our self and our higher self, between self and the beloved...the metaphor of a marriage ceremony is quite apt. 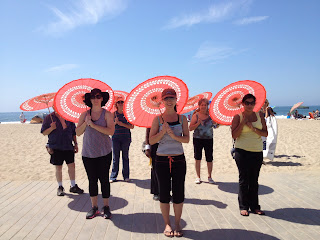 Standing in the sun isn't easy.  I know.  I've been dancing in it this whole summer.  I've noticed how difficult it gets to focus when outside under the hot sun for too long.  My brain starts to melt.  This definitely happened with our group.  After lunch as we worked on the middle section around the rock and palm garden, I could feel the energy of the group start to wane.  Back were getting sore.  Brains were melting for sure.  They were troopers.  We took plenty of water breaks and sat in the shade whenever possible.  At least the idea to work with parasols had an aesthetic AND practical purpose!

My next rehearsal with the group is Sunday Sept. 16.  We will be reviewing and refining everything that we learned and working with some new material for the motivational talk show scene, when I invite my Soul as a guest on my show.  : )

Meena is in Canada for a couple weeks, so our rehearsals are on hold until she is back.  We made a lot of progress in the last week of intensive rehearsals.  Still a bit to do, including finalizing what happens in the fountain and our scene together in the motivational talk show.