Is Santa Monica the Original Eden?

Of the many things that the readers of this blog can be thankful for this coming holiday season, among them has to be the fact that we don't live in Wisconsin. 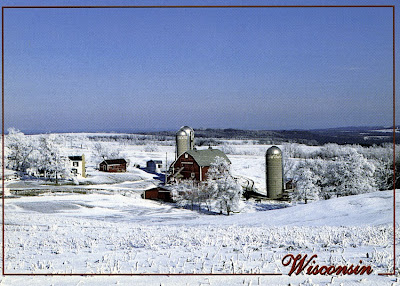 I find this postcard --- which was purchased in Wisconsin just in the last year or two --- rather amusing, not least of which because it violates all of the "Photography 101" rules for how to make a pleasing and dynamic composition. (Which would include, for starters, not sticking the horizon line dead center.)

Of course, most postcards portray idealized versions of their subject. In the case of the Wisconsin card, they're announcing how bucolic and charming farm life remains, along with sharing in some mutual congratulations about how hardy everybody is to get through these hard but picturesque winters. Santa Monica has been idealized itself now for just about a hundred years, going back to hand-tinted photos reproduced in rather garish color. 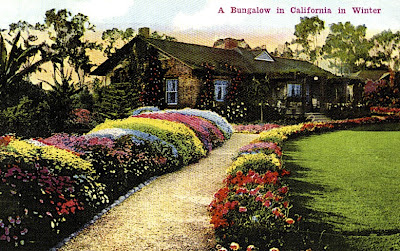 Early landscape painters were drawn to this slice of the coast as well. I don't have a date on this painting below, but would guess about 1925. The caption will follow, underneath. Isn't this grand? 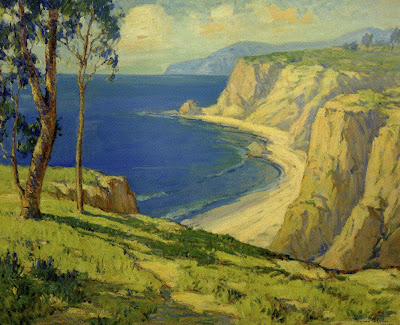 This is by Benjamin Chambers Brown, and comes from a lovely little collection titled California Colors: 1865-1942. The title for this painting is Santa Monica Palisades. Apparently no Mexican fan palms or Canary Island date palms have been planted yet, but that most Southern Californian of trees, an Australian eucalyptus, already is reaching reasonable girth on the left.

(A separate posting may have to explore the symbolism of palm trees in Santa Monica, including those on --- or seen from --- the Annenberg Community Beach House itself.) 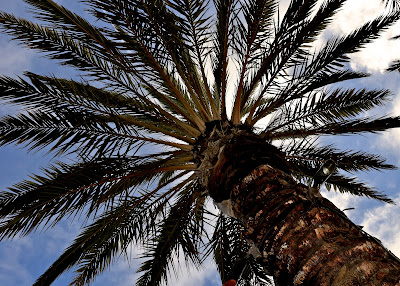 In a cartoon from the New Yorker c. 1970, a husband and wife are on vacation in a tropical location, only she is reading a magazine titled "Holiday" while there. He cautions her, "Don't tempt fate, dear."

As I shared with the visitors on Monday who came to hear the Don Bachardy talk, since I drive to the Annenberg site from the desert, for me it's an especially vivid and almost hallucinatory transition. From Joshua trees to Kaffirboom corals, and from this... 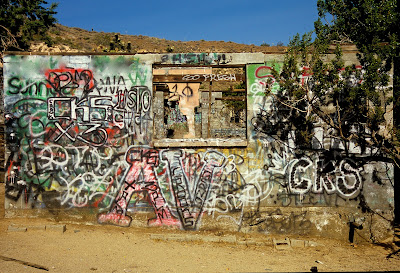 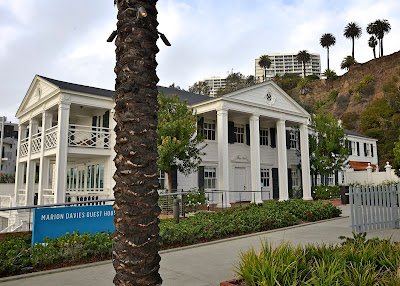 So in answer to the question, is 415 Pacific Coast Highway a bit of paradise? The answer must very nearly be "yes, indeed, and with extra sprinkles on top." Of course none of us wants to wander around Eden alone, and so this next Saturday, when I am typing away on the second floor of the Marion Davies Guest House, I do hope you will stop by and give a wave. Bring something maybe you've been thinking about doing something with --- a poem for a Christmas present, or a memoir about growing up. I'll be there at 11 a.m., and will stay until it closes to visitors, which is usually 2 pm but on this Saturday, due to an event, may be as early as 1 pm. (Check the website or call.) The following Saturday I will be out of town leading a group of British birdwatchers on a tour of Florida, but I will be back on site on Thursday the 20th, and again, Saturday the 22nd.

I look forward to meeting you.
Posted by Charles Hood at 10:02 AM