All of my UK friends have today off --- December 26th, known as Boxing Day in Britain. (That's not due to a celebration of pugilistic sports, but because of gifts one boxes up for the postman and so forth.) In London, even the museums are closed the day after Christmas.

In contrast, America the Puritanical goes back to work today, or at least the mail sorters do and the UPS drivers and the hourly wage folks such as my wife, whose boss has a simple formula: if she doesn't work, she doesn't get paid. In my case, my next day at the Annenberg Community Beach House won't be until Saturday, the 29th. (Do come on down!) Last time I was at the site, somebody asked again about the transition I make from the high desert down to Santa Monica.

Well, here's my neighborhood this time of year, or part of it, anyway. 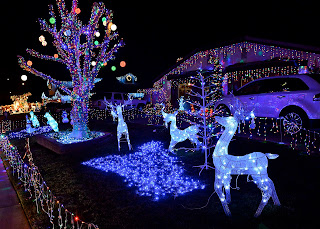 No, this is not my house --- I couldn't even afford the electric bill! But if it's vulgar or gaudy, count my neighbors in. Or to put it in the words of my former rock climbing partner, "Anything worth doing, is worth overdoing."

Light displays like this do raise the question of when is enough, enough. I think my personal vote is towards smaller packages. Hamlet says to his (spying) friends, "I could be bounded in a nutshell yet count myself king of infinite space." In other words, our minds are larger than the universe, so who needs a big car or 10,000 Christmas lights?

Even barnacles offer worlds and worlds of expanding thought.

Here's something so drab and commonplace it's easy to overlook. 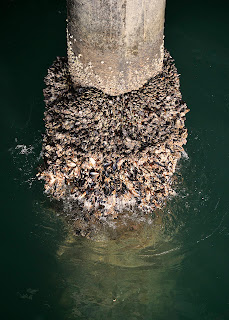 This piling on Santa Monica pier has a mix of gooseneck barnacles, acorn barnacles, brown barnacles, mussels, and limpets. (Probably some crabs, too, if I looked carefully.) Most of these species have a fairly broad Pacific coast distributions, and can be found from Alaska down to the tip of Baja. Yet they really are small miracles. In essence, a barnacle is a small, self-housing crab that holds onto a rock or pier or ship bottom with its antennae and feeds with its feet. They can survive months of hot or cold, months of being deprived of salt water, and even months without feeding. Scrabble players take note: the first larval stages are called the nauplii (singular, a nauplius). There are some intermediate stages, but at one point in the life-cycle the barnacle is called a cypris (as opposed to the tree in Florida, the cypress, or a person from the island of Cyprus, who is a Cypriot). The late great marine biologist Doc Ricketts (made famous by John Steinbeck) says of a cypris that it has "three eyes, two shells, six pairs of legs, and an inclination to give up the roving habits of youth and settle down." He also says the larger kind, the goose or gooseneck barnacle, was eaten by Italian immigrants in the early 1900s --- probably a lost culinary art, since I've never seen them harvested these days. Posted warnings caution us about eating mussels, due I suppose to an excess of toxins. Look but don't browse (unless you're a starfish). 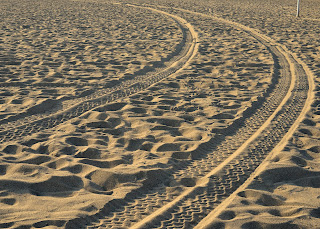 Santa Monica, like most beaches, has many treasures. There are the folks with metal detectors, hoping to find a wedding ring or lost Rolex. But I was surprised this week to find a rare shorebird hiding in the sand. As this photo above shows, footprints look a bit like craters on the moon, and if one is small enough and timid enough, the largest footprints make great windbreaks to nestle down inside of. You're protected from things that might want to eat you (house cats, Western Gulls), and you're out of the desiccating wind.

I wanted to paint this one in my journal, but didn't get around to it, so I will share a plate from the National Geographic Guide to Birds of North America. These Snowy Plovers are sand-colored and quite dinky, so are easy to overlook. They're here on the beach in front of the Annenberg site, though it's easy to miss them. You might see them down at the tide line with the Sanderlings and their larger cousins, Black-bellied Plovers, but I found them nestled almost out of sight inside footprints. 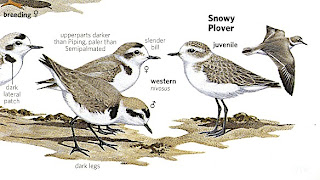 There will be a walk on Sunday, January 20th, to study these and other beach species; see the Annenberg Community Beach House website to make reservations. Other birds I have seen on site recently include Say's Phoebe and Allen's Hummingbird. I hope to sketch them into my journal too.

As for the sandpiper jobs, in England these little guys are called Kentish Plovers, and our Black-bellied Plovers are called there "Grey Plovers." Well, what do you expect from people who spell curb as "kerb"? They can't get anything right. (This is another example of why Latin binomials are so essential for scientific accuracy.) Part of it is the glass half full / glass half empty syndrome. Do we name a bird for its winter plumage (grey), or for it's brief but spectacular high Arctic breeding plumage (black-bellied)?

Of course these days, most Americans couldn't tell a plover --- the name rhymes with "lover" and not "clover" --- from a plumber's helper. Here's a shot of the children of friends of mine; all the parents are faculty members, all like to hike, and all have houses filled with books. Yet what is the heroin of choice for their children? The inevitable computer game. 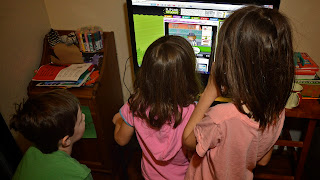 It's normal to idealize our childhoods. Most of us do it, but at our own risk. Growing up in the 1950s, I remember racism and homophobia and alcoholism and domestic abuse all too well, and from too much personal experience. But it's also true, simple pleasures and small gifts went a long way back then. I was truly happy to get a yo-yo or a paperback book or even a candy bar. (My mother's generation was glad to get an orange, but as a child I was too jaded to appreciate such old-fashioned nonsense as a stocking filled with groceries.) Books were always a highlight for me. Yet apparently a book that my adult daughter remembers well is now out of print. In my house now we have a cat who climbs Christmas trees, and my daughter, Amber, thought we should update the home library to include a lovely children's story about just such a beast. 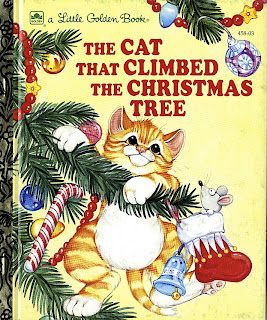 Nope, sorry, out of print! Luckily the magic of computers does begrudgingly include book searches, and so with access to used copies and expedited shipping, this title made it to my house in time for Christmas. I'll count that as one of the best presents of the season --- well, maybe that and the nerf gun that Amber got me, so I can fire warning shots over the cat's bow whenever she is sidling up too close to the Christmas tree.

The Snowy Plovers and the acorn barnacles are in Santa Monica now, and Hood will next be on site on Saturday the 29th. I look forward to meeting with you then. 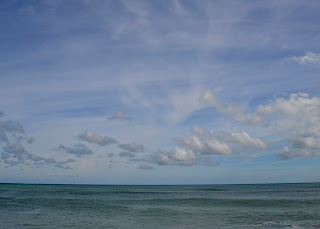