What’s the law that says, whatever can go wrong…..WILL.

It felt this week like that physicist had nailed it.

The Costume Designer, who had 20 costumes to stitch together, sliced her index finger open.  Yikes!

I suddenly realized the basement ramp entrance and exit to the Marion Davies House (in and out of which characters go A LOT) needed masking.  I had assumed the Annenberg people had a way to fix this.  They didn’t; not only that, they had told me from the beginning that particular fix was up to us.  That warning had sunk to the bottom of my brain somehow.

An actor who had already had to miss numerous rehearsals because of work, suddenly informed me he had booked a paying gig this Sunday----our final run at the show before dress rehearsal on Monday……..

And on and on.

So I watched SHAKESPEARE IN LOVE for the hundredth time.  And heard the words……

“But HOW will such and such get done?”

It’s a mystery.  Indeed.  I began to breathe again.  I relaxed.  Right away, I remembered the name of the costumer who’s a friend of our Producer, Linda Wickens.  Haleh.  I had her number.  I called her on the off chance she could help our wounded designer.  No, she couldn’t, but she had a seamstress who had just offered her help.

I called.  She was able to pick up many of the costumes the next day and is sewing away, even as we speak.

The name Norman Scott suddenly popped into my mind……one of the excellent techies (also an amazing actor) from Pacific Resident Theatre.  He met me today and is right now masking the troublesome entrance.

And the actor who can’t come to Sunday’s rehearsal will be covered.  And I’m SURE will be flawless in his performance on Monday.

It’s a mystery.  Why we do this crazy endeavor we call live theatre.  Well, Salty Shakespeareans do it, I think, because more than any other group, we get close up and personal with the audience.  And THAT’s intoxicating.  Eye to eye.  We go in deep.  And the effect of that lingers with us for a long time.

And we hope it does with you.  Things fall into place……usually when you least expect and at the last moment.  Magic.  Mystery.  Our stock in trade. 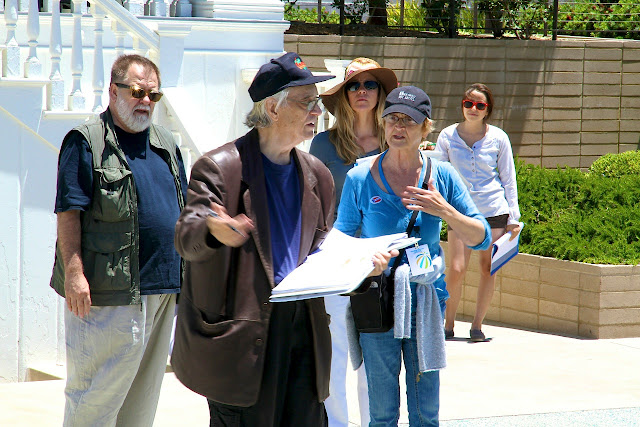 Photo by Susan Cobb Vincent of Vincent Photography
Posted by Annenberg Beach House Artist in Residence at 12:00 AM