We’re coming down to the wire----opening is a week and a half away.  My mind is consumed with a hundred details.  I barely see my own family-----except at rehearsals:  Will is one of the Hamlets.

So yesterday I had an hour and a half with 2 of the Salty Shakespeare Too kids-----the group of young people, training with the professional actors.  These kids will have one public performance of their own, before one of our final dress rehearsals.   Four scenes.  Including a sword fight.   We’re also planning to take their HAMLET scenes into some schools next year.

Now these are children…….talented and eager……but children all the same.  I’ve worked with some of them before and they know I look on them as professional actors, expecting the same emotional courage from them that I do from adult, experienced actors.

And yesterday they both made a giant leap.  I was reading both Gertrude and Ophelia (the SST girls had conflicts) and both young actors came on full throttle.  Laertes (Sebastian Schier) went from giggling his instructions to Ophelia, to warning, chiding, even threatening his sister if she continues her relationship with Hamlet.  For his part, Hamlet (Christian Soto) found the rage which erupts in him both with his mother and with his girlfriend.

And those things aren’t easy to find at 14 or 16.  Especially when you live in Santa Monica.  There’s a lot of life you’ve yet to experience.

Several visitors were watching us in the courtyard; they found me later and raved about the boys’ performances.  I’m really proud of these young actors.

Now back to the details! 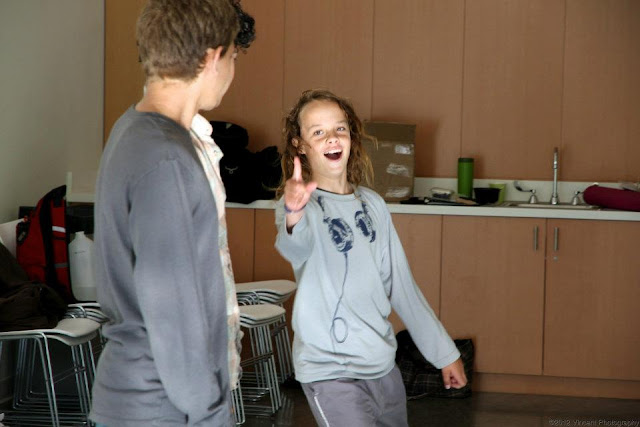 Photo by Susan Cobb Vincent of Vincent Photography
Posted by Annenberg Beach House Artist in Residence at 11:07 AM