Perhaps I overstate. I’m prone to it. But this summer residency at the Marion Davies House was truly sublime. Even when we couldn’t do some things because the historic status of the house itself might be damaged. Well, we just did what Salty Shakespeare does-----we went around and found another way. And often a better way.

But that wonderful sunken terrace on the west end of the house became a playground for us; and I’m pleased to say, I believe we used it to full advantage without harming it at all. I think the actress who owned it originally, in fact, was watching from somewhere and loving every minute of our improvisational antics. And in the last performance when Sam Hardie as Hamlet put his arms around a woman watching from the south wall, and said, “To England?” and she nodded and giggled-------well, it seemed like Marion herself giving approval to the whole affair.

I know. My imagination explodes. And now it’s over and I go on to taking a meeting in Starbucks today with a guy interested in bringing Salty Shakespeare to the Tube. Who knows. Salty Shakespeare is never planned. We go forward laughing into the darkness, stepping off cliffs and assuming we’ll know how to fly.

May all our flights be as exhilarating as the Annenberg. Thank you!!! 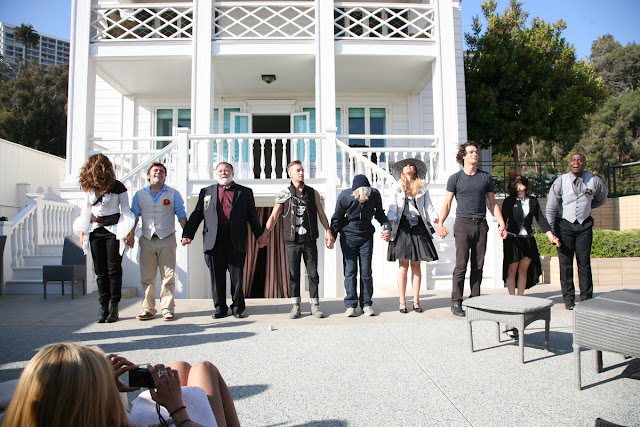 Posted by Annenberg Beach House Artist in Residence at 10:25 AM