Okay, well, I’m crying. Full out. It’s our last performance of HAMLET today, and the last day of our summer residency with the Annenberg. Last day of pretending we’re Scarlet O’Hara living in luxury at Tara.

Feels like leaving summer camp after two weeks of bonding with the other pre-teen girls, over campfires and marshmallows. And smoking behind the cabins. Too much information.

So before I drown in metaphors, let me say it has been an amazing experience. Ya know, actors can invent their magic in a barrel if that’s all that’s around. We’re like cockroaches: we WILL survive after everything else is gone…….doing one last scene from WAITING FOR GODOT or……HAMLET. We endure, no matter what.

So to be dropped into this beautiful setting for 6 weeks was like being knocked on the head and waking up in the Emerald City. But with all your best friends in tow. And we flourished. Audiences seem to like our HAMLET, filling up waiting lists as long as your arm. It’s a lot of work for only six performances but I believe we filled those with energy and focus and inventiveness enough to make Marion Davies proud. And maybe William Randolph Hurst. Who might have given us more money.

Sometimes, when I was alone and leaving that big house late at night, exhausted from a full day of rehearsing, I could feel the ghosts of all those early Hollywood celebs, all decked out in costume in the photographs in the entrance hall…….and I’d think, Wanta do a play??? Our costumer, Jaymee, could take that clownish thing you’re wearing and make it into TITUS ANDRONICUS, if she chose to.

We’ve loved it. Bye, Gigi and Liz and Melissa and Naomi and Alex and Art and everyone who helped us. And Nan. Of course, Nan. We couldn’t have done it without you!

Nancy and Linda and Tom
And the company of HAMLET, 2012 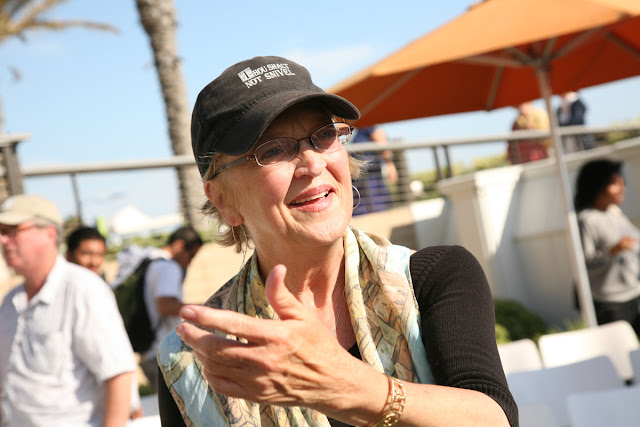 Photography by Margaret Molloy
Posted by Annenberg Beach House Artist in Residence at 9:49 AM